All ballots will contain all State and County offices, regardless of party affiliation.

If you are registered to vote with a political party, you will be given a ballot for that party in a Presidential primary election. The ballot will contain all State and County offices with all candidates for those offices, and will also contain the candidates for President for your party, and any ballot measures to be voted upon at the primary election.

As a voter registered with No Party Preference, if you want to vote for U.S. President, you must request a primary election ballot with presidential candidates.

The American Independent, Democratic, and Libertarian Parties allow No Party Preference voters to participate in their Presidential Primary Elections.

Your county elections official will send you a postcard that will allow you to request an American Independent, Democratic, or Libertarian Party ballot. Once you make your selection, return it in the mail. 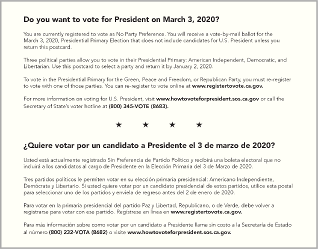 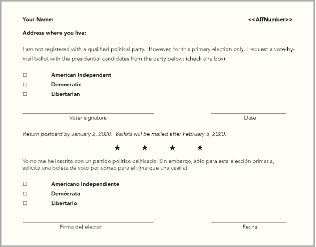 If you do not return this postcard, you will be mailed a ballot without any presidential candidates. If this happens, you can still request a ballot from your county elections official by:

You can also bring your vote-by-mail ballot to your local vote center and exchange it for a ballot with either American Independent, Democratic, or Libertarian Party presidential candidates when checking-in.

If you want to vote for the Green, Peace and Freedom, or Republican Parties' presidential candidates, you must re-register with that specific party.

Offices for this Election

The Final Amador County 2020 Primary Candidate's Guide is available in our office starting September 12, 2019, or can be downloaded here. Any forms in the candidate's guide are strictly informational samples. Official forms need to be issued by the Amador County Elections Office.

* Date falls on a weekend or state holiday; it does not move forward to the next business day.

** Date falls on a weekend or state holiday; it moves forward to the next business day.

The public is welcome to observe Election procedures but must strictly adhere to the policies outlined
below to protect voter privacy and prevent voter intimidation at vote centers.

Media may take photos or video near the vote center during voting hours, as well as interview voters
(with their permission) about the election outside the vote center.

Poll Watchers may observe the:

Poll Watchers may not:

Definition: Campaigning, making speeches, passing out campaign literature, or doing anything that could be seen as  promoting a particular candidate or measure 100 feet or less from the entrance to the poll. Electioneering is a misdemeanor offense.

Members of the public may not: