The Amador County Museum was built as a home in 1859 by Armstead C. Brown, one of Jackson's earliest settlers. This classic Greek Revival-styled dwelling sits atop Corral or Court house hill overlooking downtown Jackson. Cedar trees tower on each side of the concrete walk to the front door, planted there we believe by Brown when he completed the house. 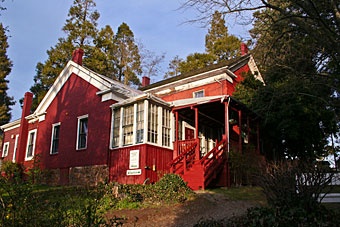 In 1849 A. C. Brown, older and more established than most gold seekers, left his Wisconsin home and law profession to "see the elephant" in the gold fields. Before coming to Jackson in 1850 or 51, he mined in what is now Shasta County, and is credited with actually naming the camp of Shasta City.

He arrived in Jackson in 1850, liked what he saw, and determined to bring his family west and settle. Thus overland he went again in 1851 to get family and return to Jackson. By 1852 the Browns lived in a rude, frame building near today's corner of North and North Main, which later became the first Catholic church in the village. Brown quickly began investing in town lots and buildings, and lived in more than one of them before moving into the new home circa 1859.

In early day Jackson, when the town was in Calaveras, Brown was a town trustee. He concentrated on his law practice, and his rental units. It the late 1860s he served a term as a legislator, and the next decade served a 2-year term as county judge.

Judge Brown served his community for a half century before his death in 1902. With his and wife Philippa's death, youngest son George W. Brown lived in the family home until 1947. Collateral Brown heirs sold the home to the county.

Entering the museum is a step back in time. It features a fascinating array of artifacts and items from the county's early days as a neglected "province" of Calaveras, the formation of Amador in 1854, and present day displays and exhibits. Visitors may wander through the many unusual exhibits that fill the 15-room home, with nostalgic background music setting the right restful ambiance.

We invite you to visit us often. History, literally, "lives here."

"Boys Will Be Boys" Starring Will Rogers

The lawyers office was the courthouse in this scene.
Will Rogers, star of silent cinema and New York stage, was one of the most popular men in the nation in the 1920s. In 1920 the star came to Jackson and vicinity to make the movie "Boys Will Be Boys." This still was taken of a scene on the front steps of the old law office at the corner of Summit and Court, now part of St. Patrick's Catholic Church. Rogers, an unpretentious, down home individual, impressed Jacksonians and they likewise indelibly affected him. In 1922, when news of the Argonaut disaster sped worldwide, Rogers immediately wired from New Amsterdam Theater in New York, and later sent $500 to help the stricken families.